Make Sailing a Breeze...
...with an easy-setup, easy-storing sail kit for your
canoe, kayak, rowboat, or inflatable dinghy.

Most kayakers opt for our strap-on rig (item 6004) but here is the bolt-on alternative:

The advantages of this rig are no side pieces, so it's easier to paddle and get in and out of, plus the elegance and security of a bolt-on mounting system.  "Bolt-on" sounds permanent, but no! --  the rig removes from the kayak just by pulling 5 pins, leaving just 5 tiny low-profile brackets bolted to your kayak deck (3 in front, 2 in back).

One hollow aluminum bar is oriented across the deck and a second one connects to it and goes forward.  The mast step (socket) clamps onto the front of the second bar.  The leeboards attach to each end of the crossbar.  Leeboards are short fins that go in the water to reduce side slippage, so you can tack upwind (takes the place of a centerboard).  The crossbar also accepts the extension arms of optional stabilizer floats (pontoons).

The only thing that is bolted to your kayak more or less permanently, is the little bracket at the base of each leg.  Each leg  is attached to its deck bracket by means of a slide-in, slide-out pin.  Pull the 3 pins, and the front assembly and legs come off you kayak.

A pair of the same legs and brackets are used to mount the rear crossbar.  The rear crossbar has a socket at each end to accept the oarlock pin of the steering oar.  It's a clamp-on oarlock, so you can let go and it won't slide away and the blade is always held vertical for you. 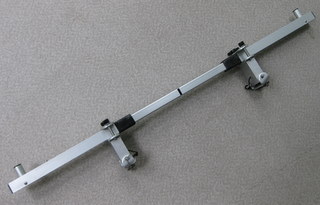